How to grow Wheatgrass

​It’s the grass that grows from wheat berries. You can’t eat the grass as it’s very fibrous, but you can juice it and that is where wheatgrass has made its name, thanks in part to the health pioneer Ann Wigmore, who promoted wheatgrass juice way back in the 1940s. Today, the Hippocrates Health Institute, which Ms Wigmore founded, use fresh wheatgrass juice as their ‘signature elixir’. 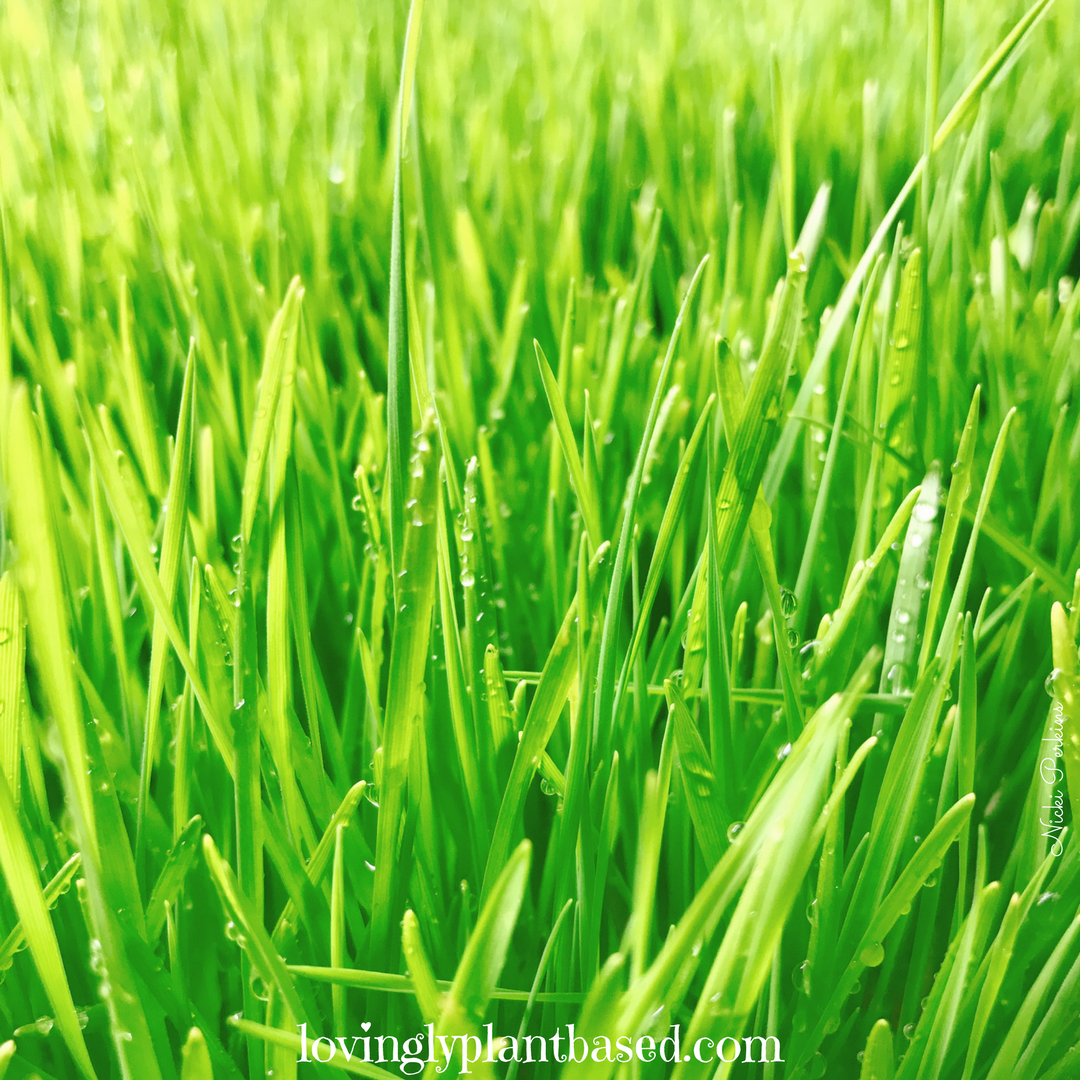 ​A natural liver cleanser and powerful detoxifier, wheatgrass is loaded with nutrition! It is made up of 70% chlorophyll, a light-absorbing pigment vital for photosynthesis, which enables the plant to make food from carbon dioxide and water. It is what gives leafy greens their vibrant green colour.
​Interestingly, chlorophyll is similar to haemoglobin in blood in terms of chemical composition. The main difference is that haemoglobin is built around iron and chlorophyll round magnesium.
"All life on this plant comes from the sun. There are very few plants that can capture the sun’s energy even closely to what grasses do.
Wheatgrass has a full spectrum of 96 nutrients from the elemental table which has a total of 115. No other food comes close to this."
- ​Brian Clement, Hippocrates Health Institute 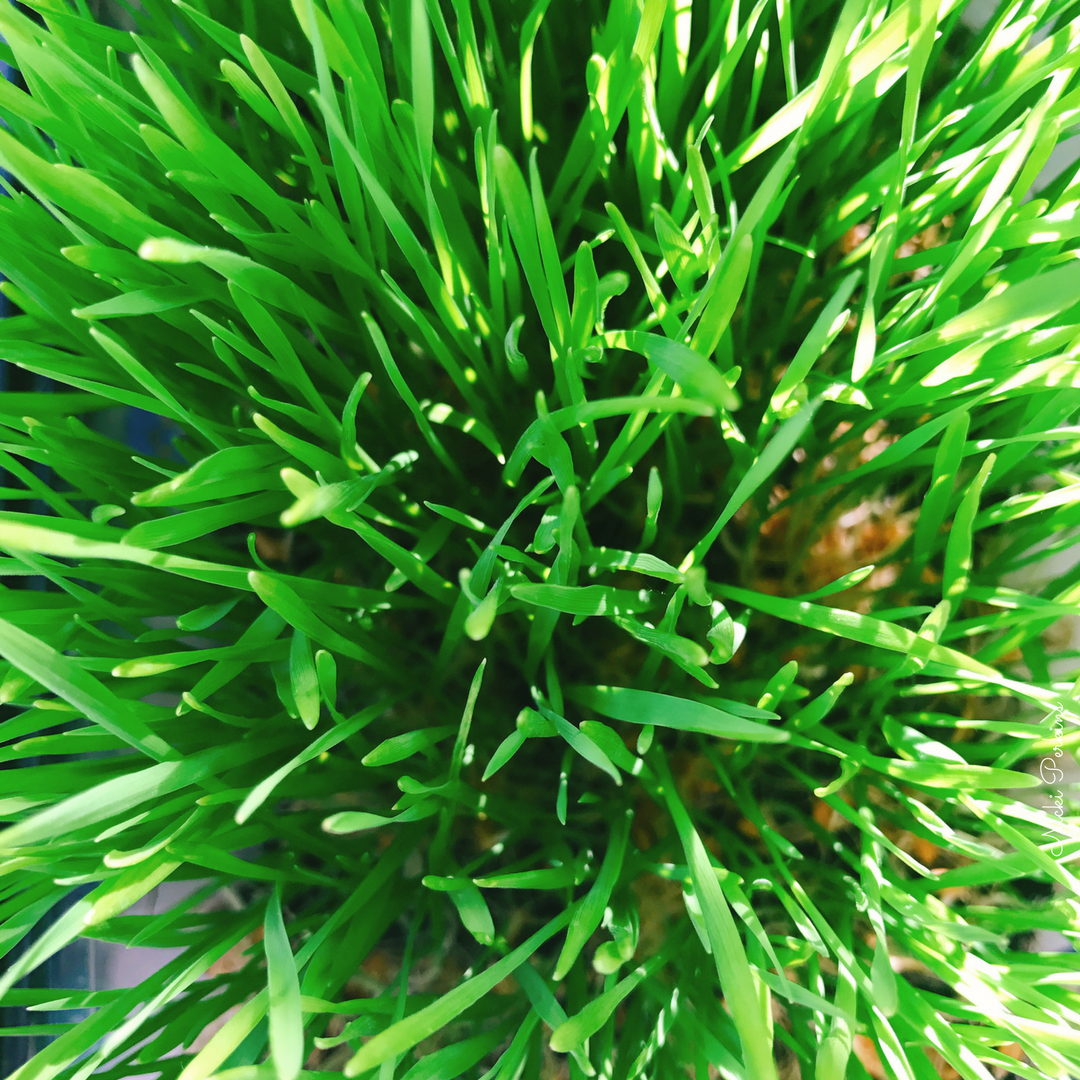 ​So! Without further ado, let’s grow some wheatgrass! 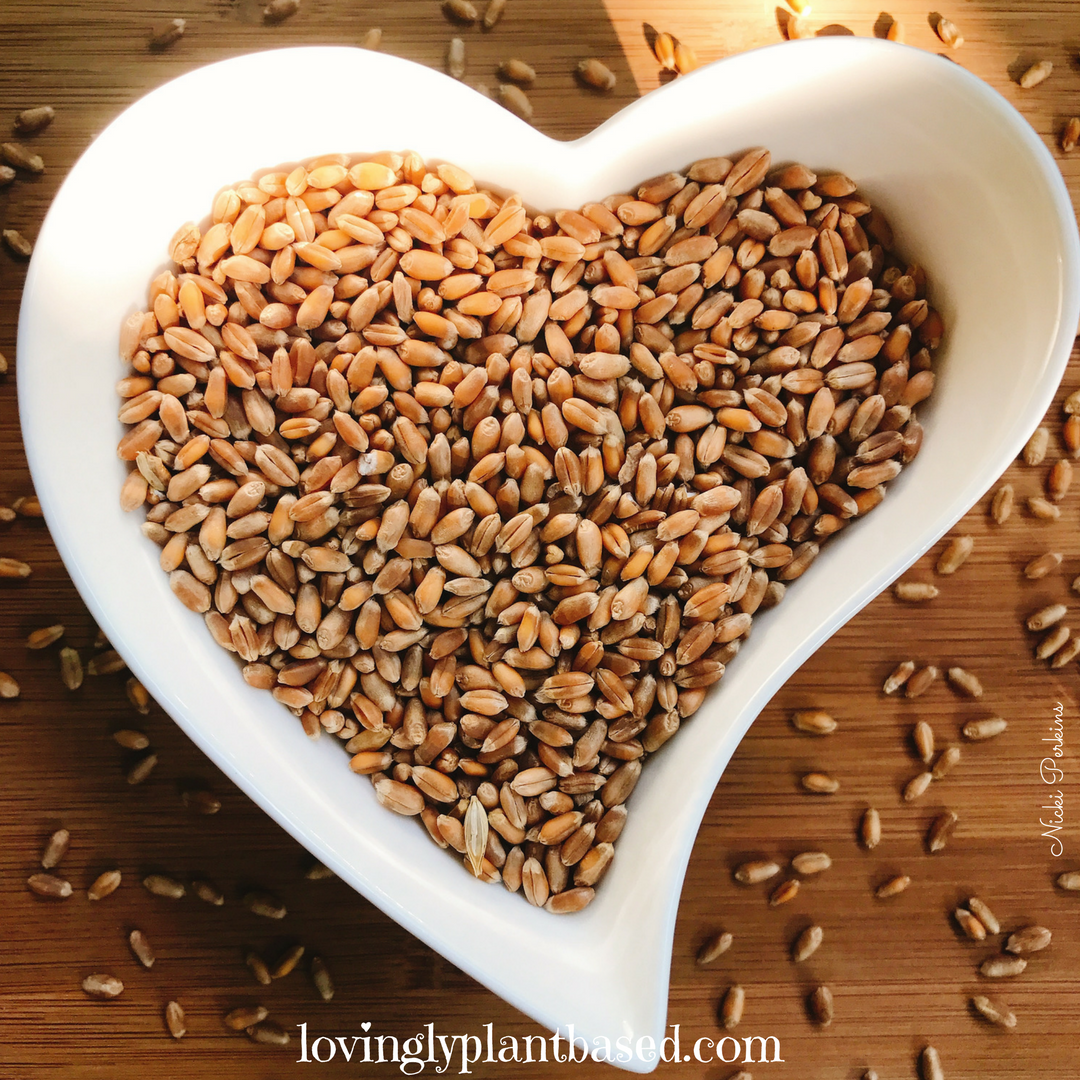 Put the wheat berries in a large jar and cover with room temperature, filtered water.
Cover and leave to soak overnight, or at least 8 hours. 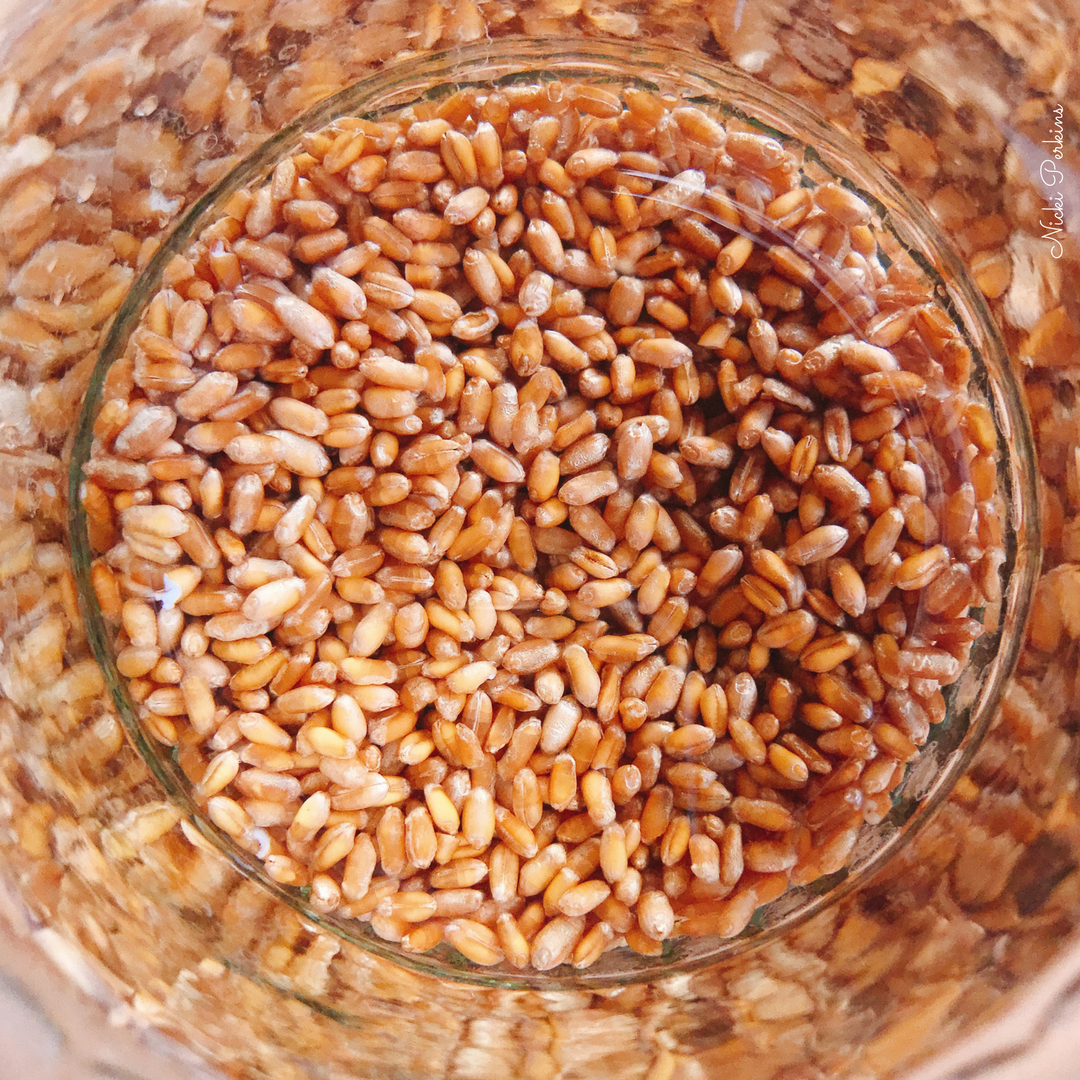 Drain the soaked wheat and rinse well. It will have swollen to about one cup and a half. 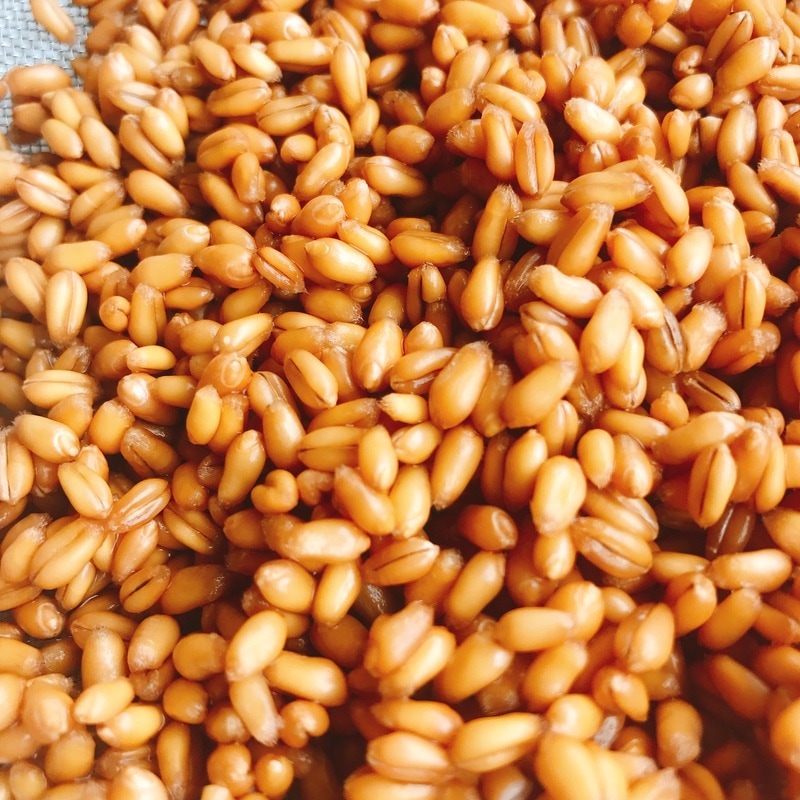 Put the wheat in a sprouting vessel to sprout.
This can be done in the same jar that you used for soaking, or in a large sieve or sprouting bag. My preferred method is a glass jar.
Watch out if you use a sieve, as the roots will go straight through the little holes and you’ll have difficulty removing the wheat without breaking off the little roots.
Rinse twice a day. 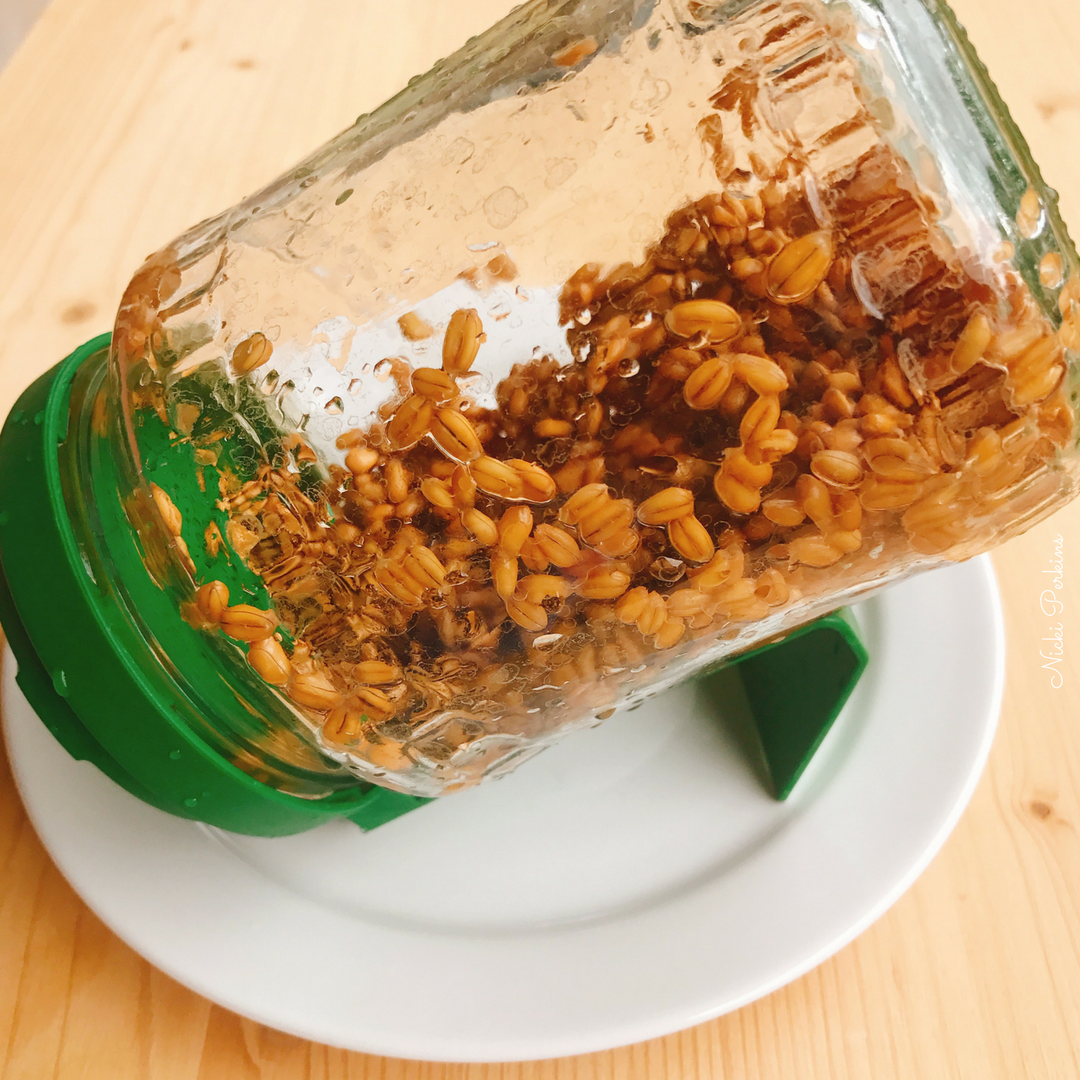 Let the wheat berries sprout for a couple of days. Usually little white sprouts appear in just a few hours, depending on the temperature. The sprouts in the photo below were a day and a half old. 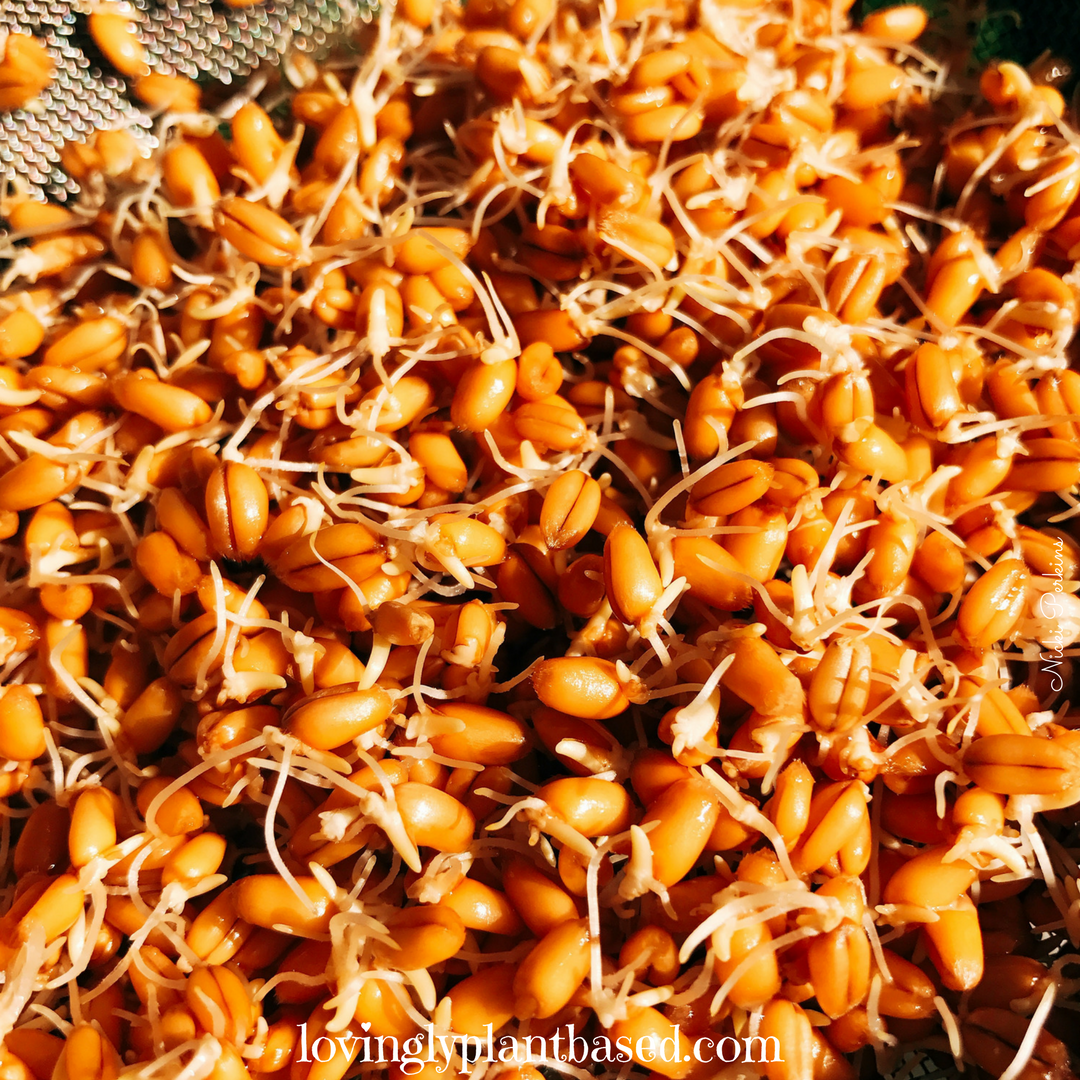 I find that shallow trays work perfectly. One cup of wheat berries is enough for an area of about 25cm x 25cm.
If you can’t find a sprouting tray, use the a draining tray or the trays that supermarket vegetables come in. Just punch a few holes in the bottom of them so that the soil is able to drain properly and you aid air circulation. You will need two trays, one for the soil and the other to cover it. To make holes in harder plastic, heat a screwdriver over a flame and then push it through the plastic to make a hole. 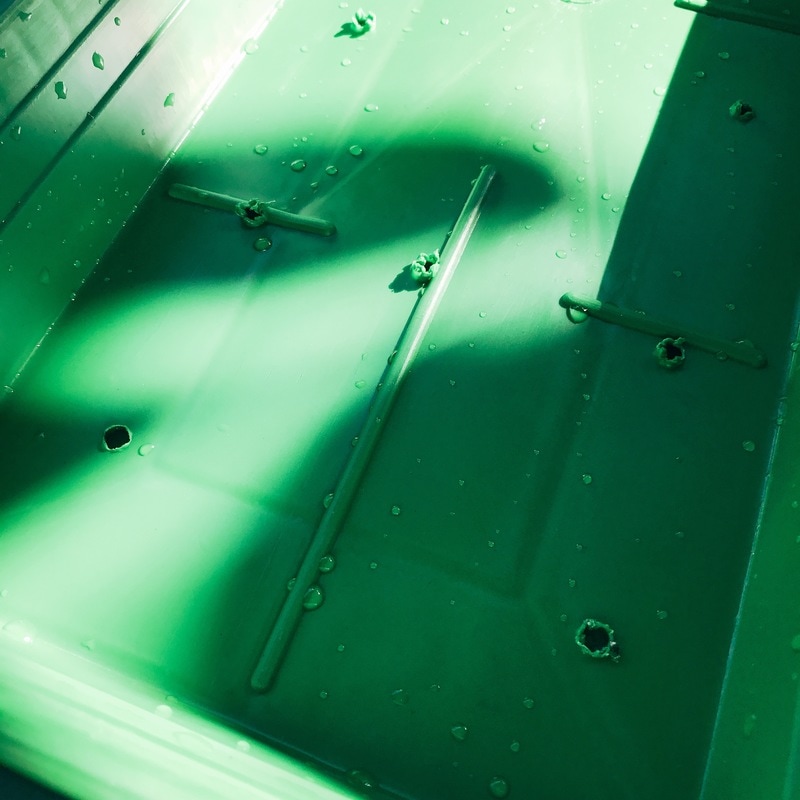 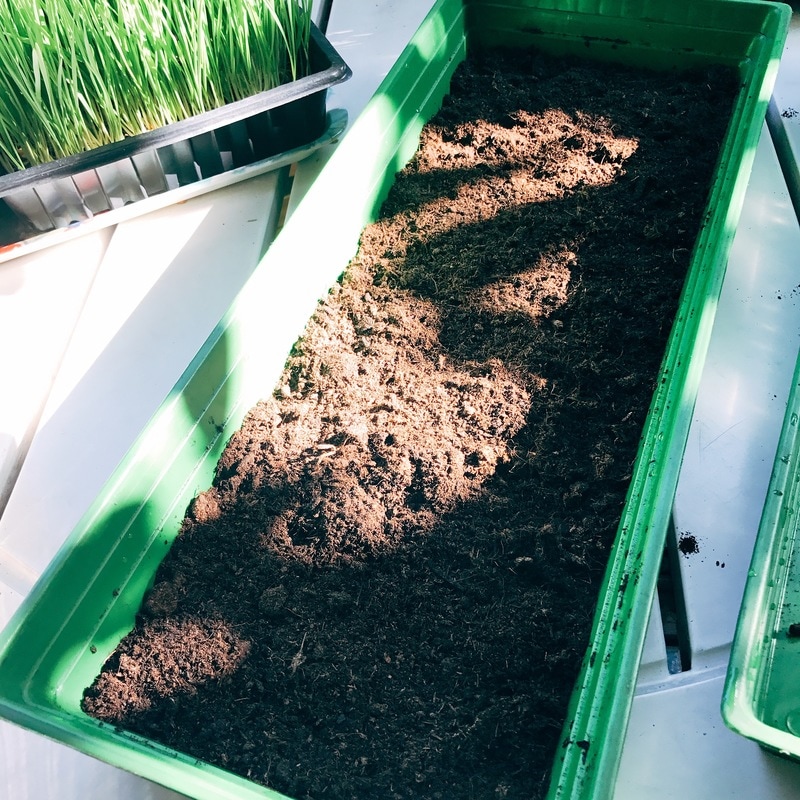 Add 1-2 cm of organic soil
​Now distribute the sprouted wheat sprouts over the top of the soil, and then spray again with water. 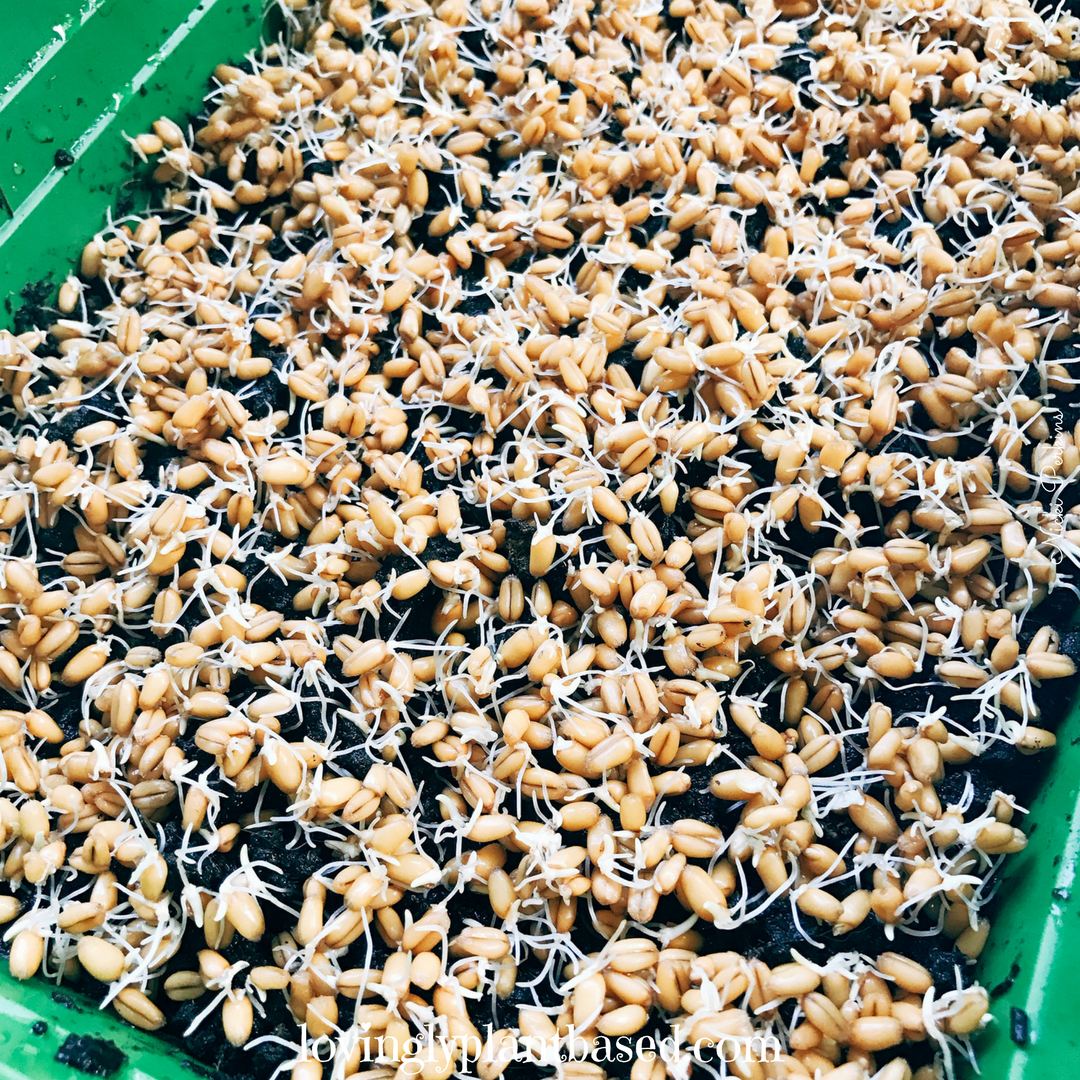 Now cover the tray with the another tray. If you are using the transparent supermarket veggies trays, cover it with foil. You want to keep the sprouts in the dark for the first few days. That's why we're covering them.

Mist the sprouts with water twice a day. Make sure they are well hydrated, but not too wet. Keep the sprouts covered. They don’t need light, they need to establish roots.
​When the grass starts to grow it will be pale yellow in colour, that’s fine. It’s pale because it hasn’t had a chance to build chlorophyll. 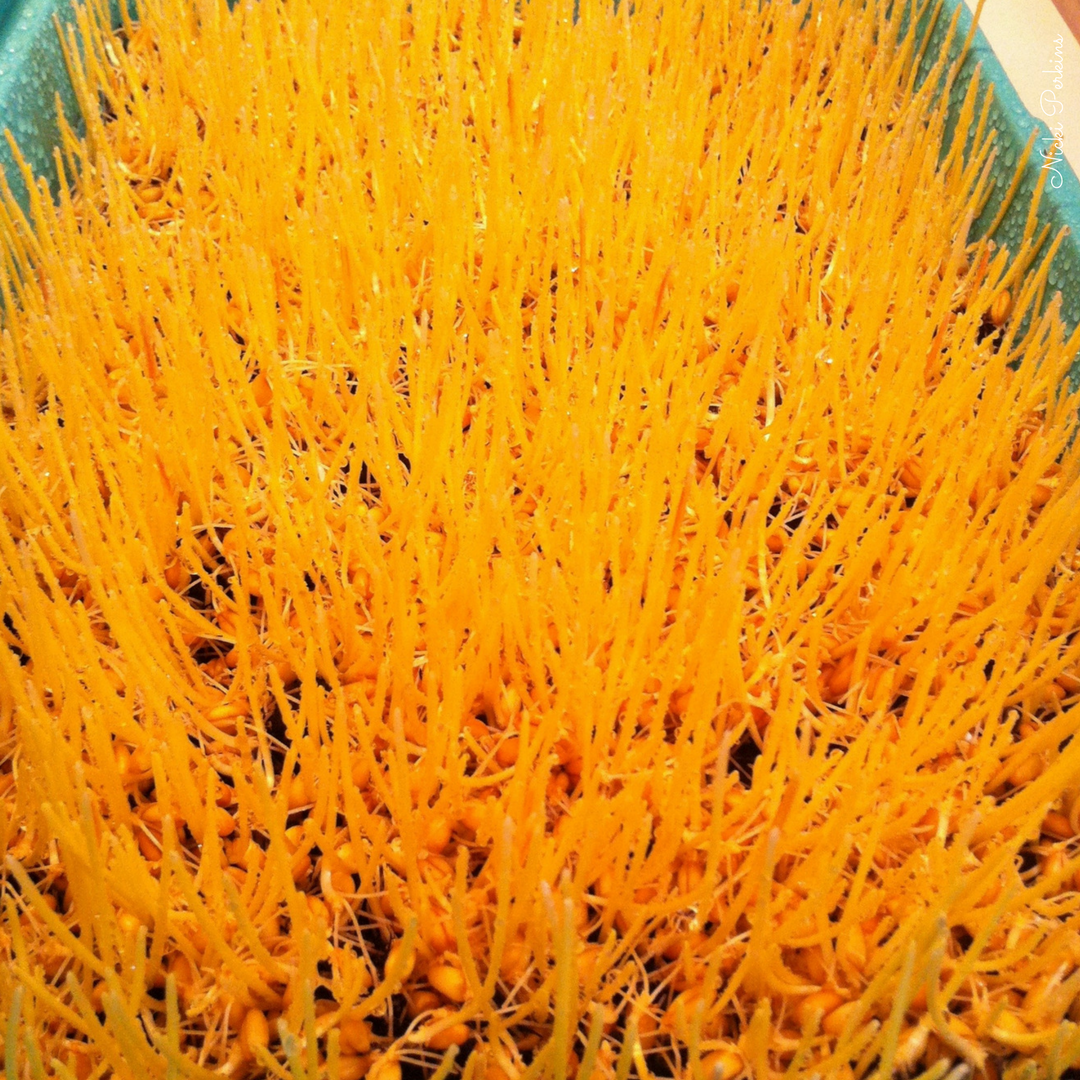 Now it’s time to let the wheatgrass have some light. It will start turning green really quickly. Don’t expose the grass to direct sunlight or it will be less sweet. 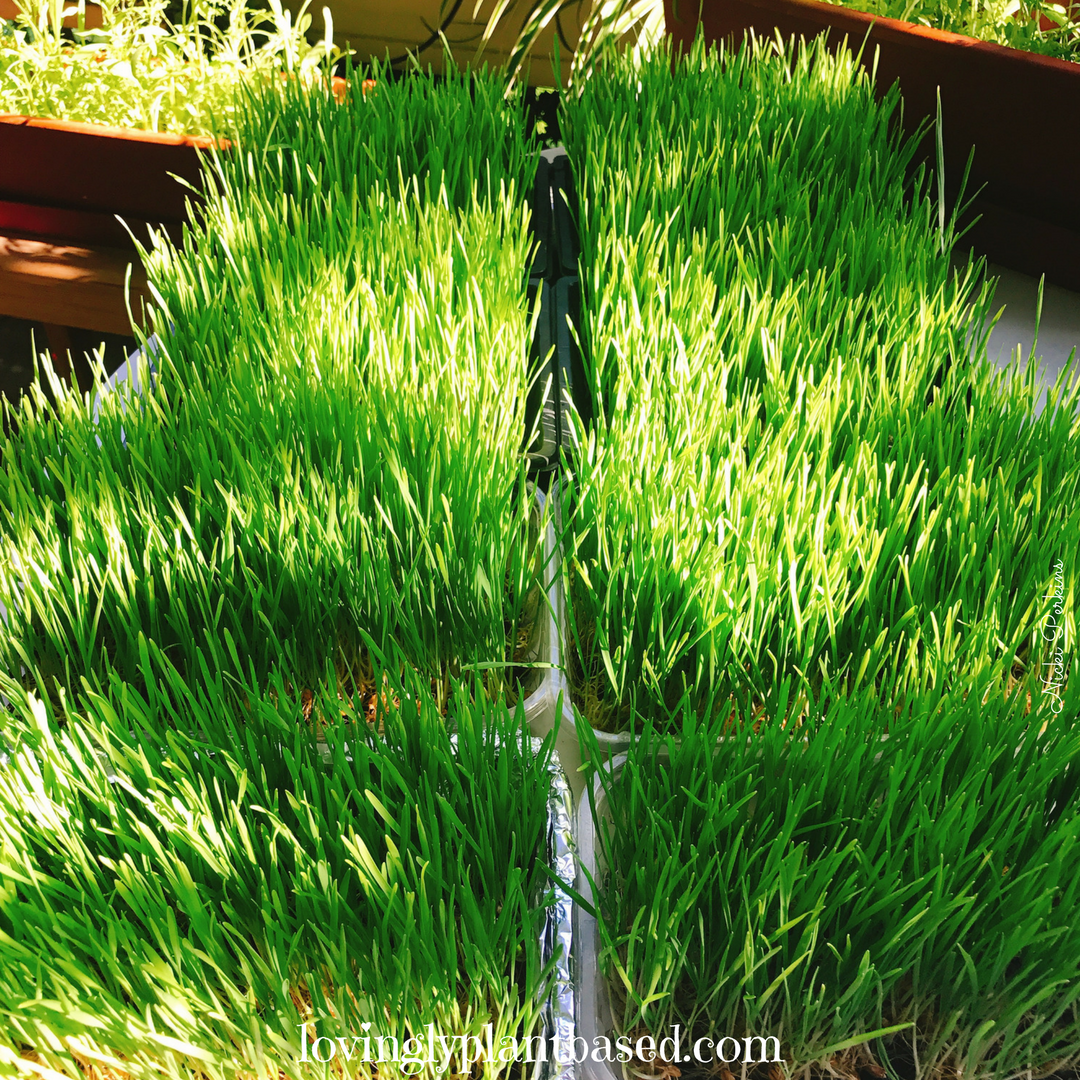 Around day 7 the grass will be long and lush. The best time to harvest it is when it starts to form a second shoot. This is called the ‘jointing stage’. This is when the grass is at it sweetest and most nutritious. 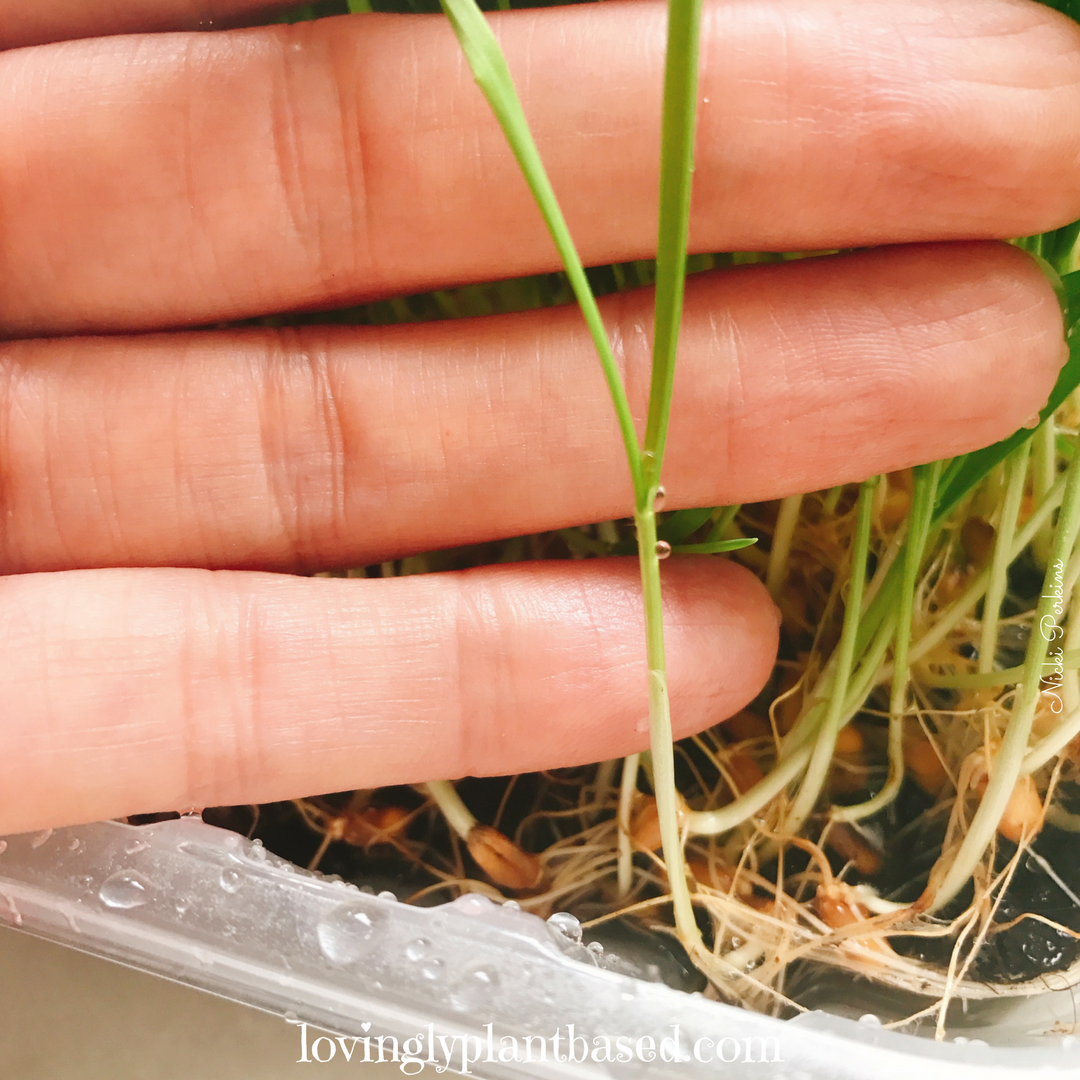 ​Cut the grass with a pair of scissors or a sharp knife.