Microorganisms in the soil

What is vitamin B12?

Although it’s known that vitamin B12 is found readily in meat, poultry, fish, eggs and dairy, it is actually microorganisms, primarily bacteria in the soil, that make this vitamin. Animals ingest these microorganisms when eating and drinking from the soil and vitamin B12 is then manufactured in their gut and absorbed.
It is a unique vitamin that must follow a really complex pathway from your mouth into your bloodstream. The complexity of this can result in a vitamin B12 deficiency, whether you are a vegan or not.

What is it for?

Vitamin B12 is essential for our wellbeing. Putting it very simply, B12 is involved in almost every cellular system in the body.

How is B12 absorbed?

​The B12 in food is bound to protein and needs to be ‘unlocked’ and released from this in the stomach by hydrochloric acid and the enzyme pepsin. Once it is unlocked it needs help to travel from the stomach to the last part of the small intestine, where it is absorbed into the bloodstream.
​Simply put, after the B12 has been freed from the food, some proteins called R-binders carry the unlocked B12 to the small intestine. Once it is there, it is picked up by intrinsic factor.
Intrinsic factor (IF or GIF) is a glycoprotein which is secreted by the gastric parietal cells of the stomach and is key in the absorption of B12. It carries the B12 to the last section of the small intestine, the ileum. Here there are receptors that absorb the intrinsic factor together with the B12 into the bloodstream. Without intrinsic factor, the B12 cannot be absorbed.
Once in the bloodstream, another protein, transcobalamin II, carries the B12 around the body to various cells and then takes what is left over to the liver, where it is stored for later use. 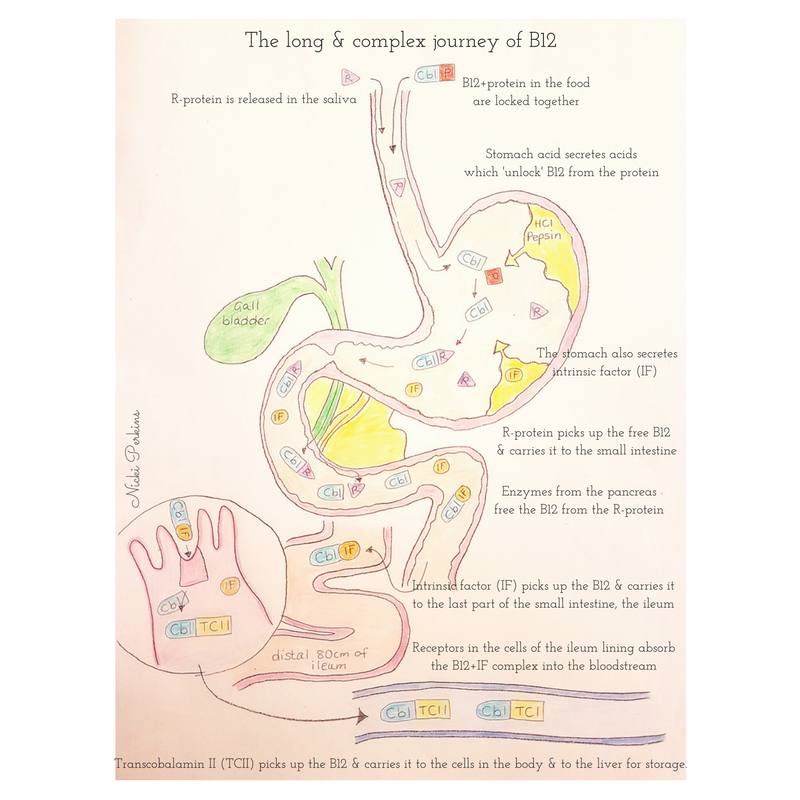 How can we be sure we are getting enough B12?

​If you aren’t consuming any animal products whatsoever and are not supplementing or eating any B12 fortified foods, you are probably not getting enough B12. Whilst there may be a few rare plant-based B12 sources, such as some types of mushrooms and seaweeds, these sources are not a reliable way of ensuring your B12 intake.
​One might think then that if we can’t find enough vitamin B12 in the plant kingdom, then maybe we are meant to eat protein from animal sources. What we are meant, or not meant to eat will be a never-ending debate and at the end of the day it is your personal choice. Nevertheless, before the modern days of washing and even sterilising all our vegetables in order to remove all traces of soil, pesticides and creepy crawlies (if pesticides weren’t used), vegetables were actually a source of B12, because they were eaten along the microorganisms that produce B12. The water we drank was also a source of this vitamin. It came from mountain streams or wells, and was not treated with chlorine and other chemicals the way our water is today.
​It has been stated (I haven’t found the studies yet) that Hindu Vegans in India do not have a vitamin B12 deficiency, whereas when these people move to England, they develop a deficiency.
This is apparently because back in their native country, the vegetables they consumed included insects and insect larvae, due to the lack of pesticides and less rigorous washing of the vegetables.
​In England it is unlikely that you will purchase and/or eat vegetables with insects, as they, together with the B12, are removed through washing (thank goodness!)
​All being said, even omnivores can be, and often are, deficient in vitamin B12. This is due to the complexity of its absorption.
Some causes of mal-absorption are:
As you can see, it’s not just vegans that are at risk.

​When supplementing B12, there are two kinds to look for: methylcobalamin and cyanocobalamin. Hydroxocobalamin is another form of B12, but it is usually used in the form of injections.

Cyanocobalamin is the form of B12 which has been studied the most. When you read the recommended daily intake for this vitamin it will be for cyanocobalamin. It is cheaper and usually the type of B12 that is found in supplements, however, that does not necessarily mean it is the best form of B12 to take.

Cyanocobalamin is not found in nature. It is an inactive form of B12, bound to a cyanide molecule to stabilise it. After you ingest it, your body then removes this cyanide, detoxifies it and converts the cyanocobalamin into methylcobalamin, after which it can be utilised by the body.

The amount of cyanide present in a supplement is minute and should not be a problem for most people, however, there are some individuals who might be better off avoiding it; people with kidney disease, people that have or have had cyanide poisoning, and maybe also smokers.
People who are fighting serious disease might also want to avoid cyanocobalamin, as it would mean having the body work that little bit extra to detoxify the cyanide, when that energy could be utilised in fighting the disease instead.

Methylcobalamin, on the other hand, is pre-methylated B12, making it more bioavailable, which means it is absorbed and utilised more easily. Methylcobalamin is, however, less stable than cyanocobalamin, and for this reason much higher doses may need to be used in the hope that at least some of it is absorbed.

How much should we be taking?

​Vitamin B12 doses can be a little confusing, so I shall try and make things a little clearer.
The daily recommended amount of B12, (based on a 1958 study of only seven people), is 2.4 mcg (micrograms) a day, but it is now thought that 4-7 mcg could be better.
However, that is the amount of what you should be absorbing, not how much you should be taking.
​The B12 receptors are saturated at around 1.5-2 mcg of B12 and so no more than this can be absorbed. After about 4-6 hours they are ready to get to work again. In the meantime however, a further 1% of the B12 that is not used is absorbed by passive diffusion through the gut and into the bloodstream to be stored in the liver for later use.
​So, a weekly dose of 2500 mcg would work out something like this:
​
1.5 mcg - absorbed through the B12 receptors
2498.5 mcg - discarded
1% of that discarded 2498.5 (= 24.98 mcg) - absorbed through passive diffusion

According to the National Institutes of Health (NIH), about 56% of a 1 mcg oral dose is absorbed.

Vitamin B12 deficiency is not something to take lightly, since the consequences can be devastating and irreversible.
It affects the whole body and some of the many symptoms can be:

So how do you check your B12 levels?
There are several ways of doing this.It is wise to remember that certain seaweeds can give false results. Spirulina contains B12 but it is not bioavailable, which means that our bodies cannot use it. The B12 serum test does not distinguish the bioavailable B12 from the non-bioavailable B12, resulting in a possible false positive.

Methylmalonic acid often builds up when B12 levels are low, in fact B12 deficiency is a common cause of high MMA levels.
MMA can be measured both in the blood and the urine and is thought to be more sensitive than the B12 blood test.
However, people with kidney disease may have high levels of MMA in their blood because they are unable to eliminate it adequately from their urine.
Higher levels of MMA are also frequent in pregnancy.

Holotranscobalamin transports active cobalamin (B12). Low levels of HoloTC are considered be to the earliest marker of cobalamin deficiency.

When a serum B12 test shows a deficiency, the MMA test and Homocysteine test might be used to get a more specific picture of the deficiency.